This is for The Latinum Vault’s Monday Mixer. Write a piece in exactly 150 words using at least three of the prompt words, a place, a thing and an adjective. I’ve decided not to shoehorn all nine words in today, there really was no place for patisserie for example, but I am incorporating six, so could still go for Overachiever!

Photograph and dragon painting by Lisa Shambrook (Please do not use)
It was against the backdrop of early morning mist that he stood firm, aware that far off over the horizon battle was on its way.  The rill outside his cave rushed down the hillside into the querulous river, and sunlight’s dancing diamonds on the surface matched the adrenalin surging through his taut muscles. He watched the sunrise and listened intently to the water’s gushing symphony. He dipped his head to drink and felt the water’s intrinsic energy intensify his own. He was on home territory and the bellicose fire dragon would have to fight long and hard.
He dug his claws into the rock, grinding the stone like a pestle as he waited. He would protect what was his, with his life if necessary, and his mind wandered for a moment, recalling the cherished egg, hidden like a precious marbled cabochon deep within his cavern, beneath his mate’s warm belly.
(150 Words) 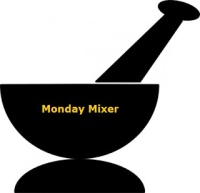 Find Monday Mixer here, and look at the rest of the entries!

6 thoughts on “Monday Mixer: To Protect”