So, I’m not a Doors fan (sorry), but this weeks Mid Week Blues-Buster over at the Tsuruoka Files is ‘Take It As It Comes’ by The Doors and the first few words caught me…’Time to live, time to lie, time to laugh, time to die’ and that’s where I took it: 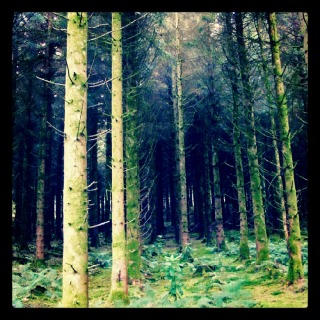 Photograph by Lisa Shambrook (Please do not use without permission)
Time to Live, Lie, Laugh and Die
She ran, her breath tearing at her throat, and her legs threatening to give way, but his crashing footfall still thundered behind her. She could barely recall his smile as her feet dragged through mental sludge.
“C’mon baby…let’s have some fun!” He grinned and his eyes pierced her through. Her breath caught and her heart skipped that proverbial beat. “Time to live a little!” he said as he grabbed her hand and lead her to the dance floor where she allowed the pounding music to flood her veins.
Caught in the moment and the euphoria of his blue eyes, she threw back her head and swayed, enjoying the way he looked at her. “Be back in a bit babe,” he said and sauntered off through the ocean of undulating bodies. He threw back a glance and she caught his wink.
Fog coursed through her mind, and her steps became clumsy and tree roots crept close to her ankles. She leaped and sidestepped, and forced herself on as the echo of broken twigs splintered her heart.
He sloshed the drink as he passed it to her. “Sorry!” His hand shot forward to brush the spillage from her shoulder, and desire at his touch burned behind her eyes. The cool drink sated her thirst and she let him take her hand.
Now her eyes burned with tears, and the trees swayed tall and liquid either side as she ran. Fear twisted its knife in her back and darkness began to fall. There was nowhere to go, nowhere to hide and his voice boomed through the dusk. “Everything’s going to be okay! Where are you? Wait for me!” His words bounced from tree to tree and she ran unable to tell which way was left or which way was right.
The drink took hold faster than she could imagine and as teasingly slow as he wanted, and it wasn’t long before she allowed him to hold her steady and lead her to safety. He laughed and she shivered as she wobbled and grasped his hand, leaning uncomfortably close enough for him to inhale her dizzy sweetness.
His laugh resounded and the chill of the drawing night danced across her skin. She shook her hazy mind and swung into dense undergrowth, her skirts catching on brambles and the wind. She ducked beneath huge, fingered leaves and rampant thorns, ignoring trails of scarlet rising across her pale arms.  Like Sleeping Beauty at the spindle she slipped into unwelcome slumber and her pursuer tore on through the night.
Daylight dawned, casting rays of gold on her sleeping body and she slowly rose, fear manifest behind tearstained eyes.  Frightened eyes darted from tree to tree as she escaped the forest’s cocoon.  A heeled shoe and bare foot stepped warily, until a few feet away lay a body. A man tripped by roots and tangled bramble, an errant fallen branch a stake in his heart, now resting cold in death…and morning’s respite brought her time.
(497 Words)

#SummerSolstice when the sun is at its furthest north in the sky and the sun will set the slowest. Today, and the days either side, are also known as #Litha, a celebration of the sun, flowers and hot days as the sun god thrives ☀️💛 #MidSummer 💛☀️
Father's day... after a bit of a mishap on his motorbike yesterday Vince is enjoying a day where we do everything for him... the perfect Father's Day 😉💙
#Litha or the #SummerSolstice begins today 20th through 24th June... so this is my #Midsummer #CrystalGrid for Balance and Harmony at the point between light and dark.
💜💚 I'm offering 20% off everything at www.amaranthalchemy.etsy.com for Midsummer ☀️
I love the way #campanula grows anywhere it wants to, in cracks in the wall, pavement, flourishing and creating beauty in diverse places... I want to be like campanula 💜
I think I'm going to wear this dress every day when it's warm/hot... it's just easy. Soft, no buttons, zips, no sensory triggers, easy, and cute. There's a freedom in a short dress that just let's you feel good!
A weekend or so ago, we went down to see family, and had an amazing day seeing those we hadn't seen since long before the pandemic. It was so good to see my brother and sister, Dave and Jules, again! 💙
Kira and Cait - when the fog makes for an ethereal land of the fae 🌿🥀🐾
Distraction technique... go out and have a #HotChocolate 🤎☕