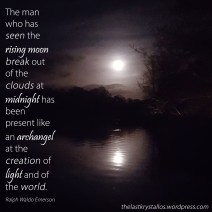 Cara moved slowly down the jetty, enjoying the warm weathered wood beneath her feet. She stretched her fingers by her side, flexing them and releasing pent up anxiety. Air caressed her naked skin and with conviction she pushed her shoulders back, ignoring the twinge of pain, and rotated them in unison, smiling wryly at the cracking sounds her bones made echoing in the humid night air. She drew in a deep sigh then let her breath ride on the breeze that fluttered about her.

The stars twinkled like diamonds studded in blue satin and Cara was exactly where she wanted to be.

Dainty steps took her to the end of the pier and she carefully lowered herself to the broad pontoon, her mouth opening as she smiled at the sway beneath her. Her knees were noisy too as she bent and dropped to the floor, but they would soon be eased.

She sat, her hands flat on the deck beside her, leaning back slightly to gaze up at the sky. The Milky Way stretched across the night and she wondered what it would feel like to float up into the sky.

Cara let her feet dip into the water, toes first, testing the temperature, then her legs up to her calves. She welcomed the flow about her toes as she gently moved her feet.

Water and stars…and my moon, Cara breathed out her words, almost silent thoughts, but a soft whisper took them from her mouth.

She jumped at the hoot of an owl and water splashed about her toes, and she laughed as the bird soared across the lake disappearing into the dark woodland at the shore. Bats also darted, seeking gnats and midges, but Cara felt akin to them and enjoyed their swooping paths.

Cara gazed at the moon. All her life she’d worshipped the deity of the night sky, softly lighting the dark and showing her that even when she wasn’t whole she was still full of depth, and mystery, and power. She smiled at the moon and lifted her hands, cupping them about the orb before her then closing them in a prayer.

Thank you, she whispered.

She shuffled forward on the deck and lowered her body to the water. The little strength in her arms left her and she let herself go, plunging with abandon. She didn’t hear the splash she made, just the bubbles and the oddly comforting gurgle that rumbled in her ears as she slipped down through the water.

For a moment she let the water envelope her, like a cocoon, then she moved her arms downwards and kicked her feet. She broke the surface and swallowed a deep gulp of air, her feet and hands still paddling. It was colder than she’d expected, and it took a moment to adjust her breathing and relax her body, but soon she stopped agitating the water and let it lap at her chin, her hands gently undulating beneath the surface and silver hair spread like a watery spider’s silk.

Her creaking joints quietened, the pressure easing as water supported them and pain lessened as if leaching into the liquid surrounding her. Slowly Cara let her body rise and floated with her head back, half submerged. No sound but the lapping water, and nothing to see but the stars and the moon bathing her in white light.

Still floating, Cara let the moon bless her, its gentle rays soothing away her pain and hurt. Stars shimmered and glitter rained down in spirals like winter snowfall. She smiled, meds kicked in and fatigue faded replaced by lofty intoxication. She was alone in the world, completely and utterly, and when they finally came looking they’d wonder, but they’d never know. Not until she was home.

Cara gazed up at the moon as water closed over her face.

The moon smiled, Selene smiled, waiting for her beloved to return…

Stars and the moon enthrall me, so loved this prompt picture by James Wheeler – Moonlit Dock for Miranda’s Mid-Week Flash Challenge.

Write up to 750 words inspired by the prompt photograph.