When Loren and her siblings’ lives change in an instant,
and dragons fill the skies above,
they will need to face danger with courage, and a little cowardly lechrad…
The Seren Stone by Lisa Shambrook

Today, April 5th, sees the release of The Seren Stone, a fantasy tale that puts Loren in a time and place she knows she shouldn’t be with no way to get home. How would you feel?

This was never meant to be an epic adventure… all Loren did was try on a family heirloom pendant and then she and her younger brother and sister were vaulted into a future they couldn’t recognise – with dragons!

This book is a fast paced, descriptive journey into an unfamiliar world which suits readers of all ages, from children to adult. As an autistic author emotions are something I work with daily and that comes through in my writing. Courage and self-belief in the face of fear is also something I fight with, but Loren needs to face her crushing fears and with help from a few dragons and a little lechrad – she might just do that!

The Seren Stone, published by BHCPress, is available in all your favourite bookshops:

Available as ebook, paperback, and hardback as bookshops offer.

The Seren Stone by Lisa Shambrook

Beneath the Old Oak is a story that brings forth a young girl’s courage
and helps her grow through tragedy like a tiny acorn turns into a majestic oak. 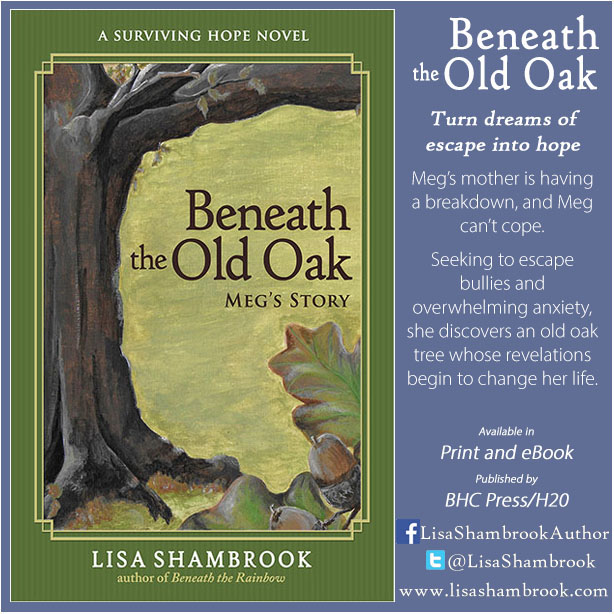 Meg’s mother is having a breakdown, and Meg can’t cope.
Seeking to escape bullies and overwhelming anxiety,
she discovers an old oak tree whose revelations begin to change her life.

Beneath the Old Oak is released through BHC Press on 16th October and is a novel that will completely captivate you.

“A brave book that tackles serious issues for a younger audience in a mature and sensitive way.” —LibraryThing Early Reviewers

“I was awake until about 1am reading this one. I could have put it down anytime, just didn’t want to.
This story leans heavily to the subject of depression. There are many of those on the kindle, few quite as believable, even less as credible. The family with a single child are wonderfully developed as they are deeply troubled.  A father who goes to work and his involvement limited in their troubled life, a mother slowly slipping away from all of them, and a young girl with too much weight on her shoulders left to clean up the mess.
…the oak tree becomes symbolic of the escape from harsh reality for both mother and child when there are so many issues that should be confronted, so many secrets that should be out in the open.
This is the kind of book I recommend people read regardless of what kind of genre you prefer. It’s one for everybody. Just read it.” —

Beneath the Old Oak is now available in eBook and paperback (choose your format) at:
Amazon UK, Amazon US, and your local Amazon. Barnes and Noble, Waterstones, Google Play, Kobo, iTunes, and other online outlets.