So, this is the post that will entice you to the Scottish Highlands
– which as you saw last week, just became my default favourite place!

We split the twelve hour journey of just over 600 miles over two days, staying in Moffat, just over the border, at a lovely B&B before traveling up to the north coast. Sat Nav on our upgraded hired Toyota Land Cruiser decided she wanted to take the long way round on the second day – had enough of corporate driving and she wanted to see the north country as much as we did! So instead of driving up through Stirling, we found ourselves circumnavigating Glasgow and heading up to Loch Lomond, and why not? The loch is huge and it’s where we began really noticing the mountains…

We rounded a bend on the road leading towards the Bridge of Orchy and had to stop to take in Beinn Dorain as cloud topped it like an unseasonal snow cap! Then the mountains at the western end of the Grampians just kept coming and we kept stopping to take photos – always remember to add time to your expected arrival due to stopping for photos – because you will… Then Buachaille Etive Mor towered above us like a craggy volcano and it kept on through Glencoe and Ben Nevis.

We’d planned to stop for lunch at Castle Urquhart by Loch Ness, but instead we had lunch at Fort William, and by the time we reached the castle it was overcrowded to the point of us only needing a quick photo op in the car park before moving on.

We crossed the bridge at Inverness and moved up into the Highlands. Lochs glistened, swathes of purple heather covered the hillsides, the sun disappeared behind clouds and the mountains hid, then they towered again as the mist evaporated. Glens and forests carpeted with the most luscious green had rivers and waterfalls, and finally as we drove up the single track road for an hour to Coldbackie, the sun began to set behind the rugged mountains of the Sutherland range, with Ben Loyal on the horizon and lochs of gold glowing in the sun’s last fiery rays beside us. It was enchanting.

We took the Pentland Ferry on a wildlife cruise at John O’Groats, hoping to see seals, puffins and other advertised wildlife, we saw seagulls, lots of gulls, and scarfies, and even a stray jellyfish, but not much else. The ferry did take us around Duncansby Head and the stacks and red sandstone cliffs are stunning. And we got that obligatory photo of the family standing beneath the signpost at John O’Groats just like we did at Land’s End seventeen years ago!

Eilean Donan Castle has all the beauty and excitement of a fairy-tale as you approach and by all means go and take photos of the glorious building on the edge of the loch at Dornie, but we felt cheated by the tourist trap the castle has become. There are no photos of the interior of Eilean Donan, because the current owners don’t allow it, and you are herded in like cattle, as the castle attempts to make as much cash as it can. Don’t get me wrong, the castle and interior is beautiful, but you are only allowed to see the displayed rooms, so many are shut off, as are the buildings surrounding the main hall and castle. I was hoping for Viking and Medieval history, but only got the last century, and the current owner’s family pictures are, strangely, dotted all through the nineteenth and twentieth century rooms, moving you awkwardly out of the period they’re exhibiting. Go and take photos, but save your money and find another castle to go inside!

Then we ventured on to the Isle of Skye. The Fairy Pools have been on my bucket list for years – but I was so disappointed to find that due to the intense rain that night, the river you have to cross to get to the Fairy Pools was overflowing, and without proper waterproofs we’d have had soaked feet/shoes all day, and possibly all holiday. Many, many visitors that day traipsed down to the river and had to turn around unable to cross it, though it couldn’t have been more than five feet across. There was a lot of disappointment in the air, and it wouldn’t have cost much to make the stepping stones bigger, or put in a small wooden bridge to allow access. The Fairy Pools are still on my bucket list and I’ll make it another year. 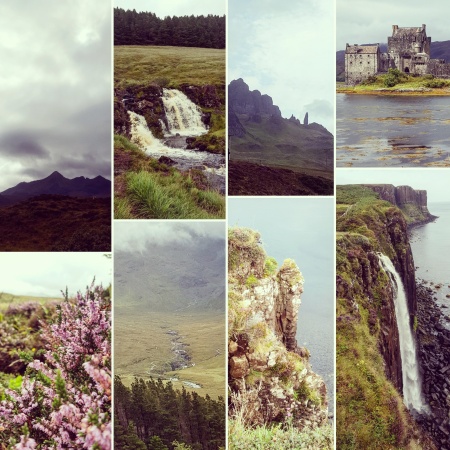 We did see the Old Man of Storr, jutting out rock formations, and then Mealt Waterfall with Kilt Rock in the background, and the waterfall made my day!

When we finally wandered down to Coldbackie beach, more of a climb actually, we were met with the most gorgeous little bay. White sand ran from the dunes to the sparkling water, and what water! It merged from every green to every blue you could imagine…from crystal white Quartz froth, to pale Amazonite, and Adventurine, then to Turquoise, and rich Apatite blue, before darkening to the tone of Sodalite. An ocean of jewels!
Quartzite and Pyrite glittered in the rocks and I quickly became a beachcomber!

We headed west to Durness and visited Balnakeil Craft Village, then walked down to Smoo Cave. In Smoo Cave you can pop in and see a waterfall for free, or wait for a short tour from local geologists and diggers. Write your name on the board and then they’ll help you board a small dinghy and move you across the pool inside the cave to see the waterfall close up. Then you get a short tour of the caves and a keen geologist will tell you all about the area and the current dig! It was up close and personal and well worth a fiver each for something very different. 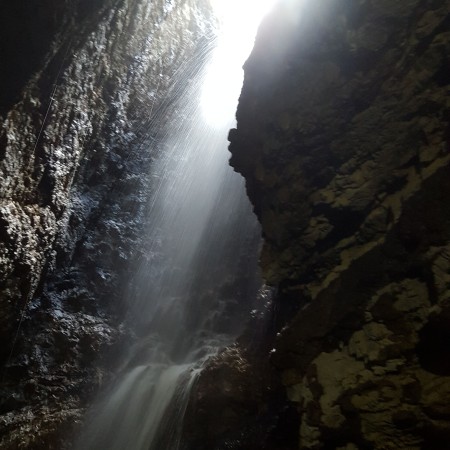 Achmelvich beach was recommended to us, Evan – this one was for you – and it didn’t disappoint. Like Coldbackie, white sand spread at your feet and clear blue/green water lapped at the shore. We sat up on the rocks and ate chips while basking in the sunshine.

We’d had a Whale Watching Boat Trip cancelled earlier in the week due to high winds and rain, and refunded we spent the money in Wick on a tour in a rib boat instead. Caithness Seacoast was great! We dressed in waterproofs and braved a grey day out on the sea. The East coast cliffs were gorgeous, and the local guide very informative. We learned about Viking history, right up to the present day, and it was fascinating. He hoped we’d see more wildlife, but he pointed out that this late in the season (last week in August) most of the young had left, so puffins had flown two weeks prior and many of the seals had moved too. Again we saw Scarfies and Fulmars, and of course many gulls, and eventually we did see a seal! We sped about the sea, beneath arches, around stacks, and in caves, and stopped in several coves. We learned the fishing history, and saw Whaligoe Steps, an inlet which became a harbour in the eighteenth century, and crews of women would gut the fish in the harbour then walk up and down the 330 or 363 (locals dispute the official 330) steps, 250 feet, with full baskets before taking the fish to Wick market.

After the boat trip and lunch we visited Castle Sinclair Girnigoe, free, and atop a gorgeous cliff, then we saw the Trinkie a tidal swimming pool, rather abandoned at present, and then we looked at Whaligoe Steps from the top!

On our last day we stayed local, hiked up to Varrich Tower (though it says it’s a castle), had lunch near Loch Eriboll, I was enamoured by the little headland in the loch – rather desiring to live there – but it’s gated so you can’t go down. We took a back road to Ben Hope and took photos at an old roundhouse before wandering into the forest near Altnaharra. The forest was everything a woodland girl would love, heather, moss, Scots Pines, toadstools, and a loch hidden away inside. 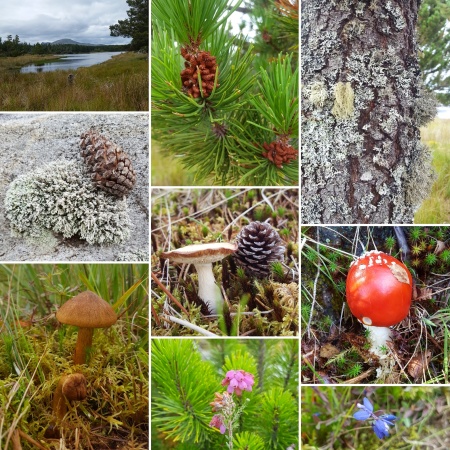 Our last surprise was realising how close we were to the Kelpies, named after the mythical water horses said to be in Scottish lochs and rivers, at The Helix as we drove through Falkirk and we doubled back to see them. Thirty metre tall horses, Glaswegian Andy Scott’s amazing sculptures of steel will literally steal your heart.

We saw deer, and an otter, and sheep guarded the roads! We had rainbows almost every day, sunrises, sunsets, mountain ranges like towering wise old wizards, fairy glens, sparkling lochs, cascading waterfalls (we saw Grey Mare’s Tail waterfall in Moffat on the way home), and the jewelled ocean… 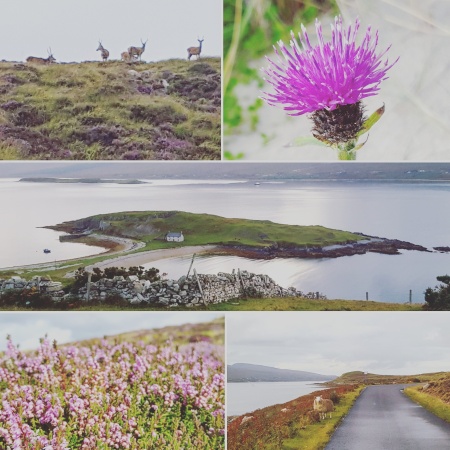 And thus ended our tour of Scotland – but have no fear,
we will be back, and maybe one day, we’ll be able to stay.

Have you visited Scotland? If so what did you love most? 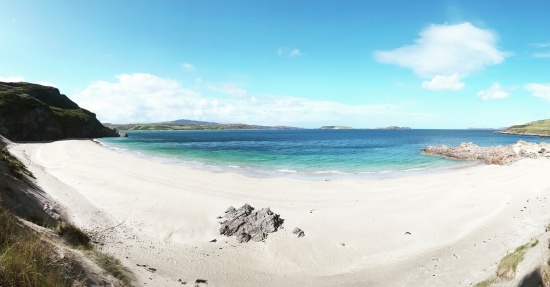