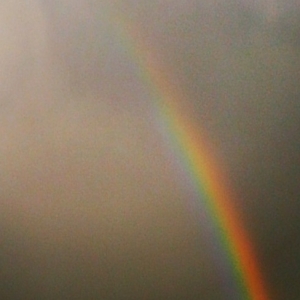 “Pillarbox red…you know, red like that sexy scarlet lipstick I could never quite pull off…” Aggie’s laugh tinkled in the crisp morning air and she squeezed Harold’s arm. “Orange, well that speaks for itself, then there’s yellow, the kind that we all wore in the sixties or that they make those rubber ducks out of. Green…” she sighed, “the kind of green that spreads across the English countryside…fields and trees and hedges, that kind of green. Summer sky blue, and indigo, like a summer storm, a storm bearing down, broiling and threatening…and violet,” Aggie’s voice broke,  just for a moment, “like the stone in my ring, amethyst, like my engagement ring…that’s what it looks like…remember?”

Harold’s foggy eyes crinkled at the edges as he smiled and clasped Aggie’s hands tight within his own; he couldn’t see the tears, that rested like dewdrops on her wrinkled cheeks, any more than he could see the rainbow arcing across the sky, but he didn’t need his sight as long as he still had her.

My Five Sentence Fiction for the prompt word ‘grief’ over at Lillie McFerrin’s.