‘Don’t tell me the moon is shining; show me the glint of light on broken glass’
summarised from a letter Anton Chekhov wrote to his brother,
this quote has resonated with not only my writing style,
but also with my love of the Moon.

The moon is paramount in The Seren Stone Chronicles and appears in different phases and forms within all three books. It’s been an inspiration to me since I was small and used to gaze up at the sky and imagine reaching for the silver globe… La Luna has been the muse for many a poet and writer and will continue to stir the soul while she sits and guards our night sky.

The full moon occurs every twenty-nine and a half days, so every few years there are thirteen full moons, this extra full moon – the second in one month – is known as a blue moon, hence the phrase once in a blue moon. As the moon’s cycle is over twenty-eight days, every nineteen years we’ll have a February with no full moon, known as a black moon.

I’m rather fascinated by the names of moons, and each month has a name given by the ancients to describe the manner of plants, animals, and weather during that phase. 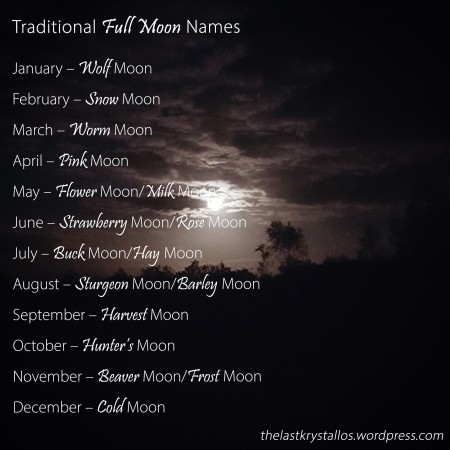 I am equally inspired by the names given to moons that orbit our planets… All my Amaranth dragons are named after moons or myths associated with the moon. It left me with a bit of a problem when I finished rewriting my final novel in the series. A dragon named Sedna had to be renamed, because Sedna in the early 2000’s was thought to be a moon connected to the planet *Pluto, but Pluto’s demotion to a dwarf planet in 2006 meant Sedna then became a dwarf planet too instead of a moon. *Note: Pluto will always be a planet to me…

Did you know that Mercury and Venus have no moons? Earth has just one: Luna. Mars has two called Deimos and Phobos. Jupiter, on the other hand, has seventy-nine moons; her biggest are named Io, Callisto, Europa, and Ganymede. Ganymede is the largest moon in our solar system, larger than the planet Mercury. Europa also appears to be the best suited to finding an environment which could support life within our solar system beyond our earth. These four moons are spherical, but Jupiter’s other moons are generally rough shaped pieces of rock. 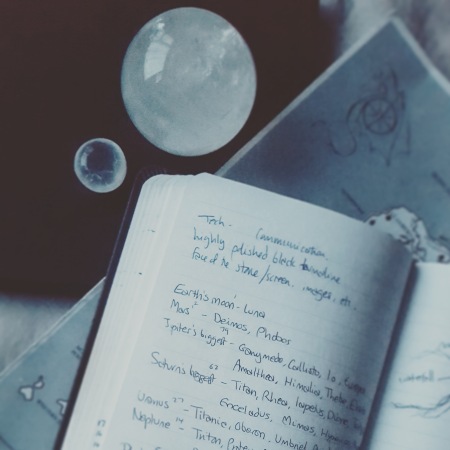 Titan is Saturn’s largest moon, she has sixty-two moons, and Titan even has its own atmosphere. Titan is huge in comparison with Saturn’s other moons, and a theory believes there may have only been two moons but one broke up possibly creating Saturn’s rings and inner moons. Saturn’s moon Mimas is its most cratered and the Herschel crater gives it a Death Star look!

Uranus has twenty-seven moons which are named after Shakespearian characters: Titania, Oberon, Umbriel, Ariel, Miranda…and more. Neptune has fourteen moons and its moon Triton is as big as Pluto.

I love how Shakespeare has influenced the naming of moons! So many names are associated with our own moon. The Roman’s know Luna as Diana and Juno. Artemis, Aphrodite, Selene, and Hera are Greek Goddesses, Egyptian association with Isis, Hathor, and Seshat. She is known as Sedna by the Inuits, and Shing Moon by the Chinese, and the Celts named her Morgana. 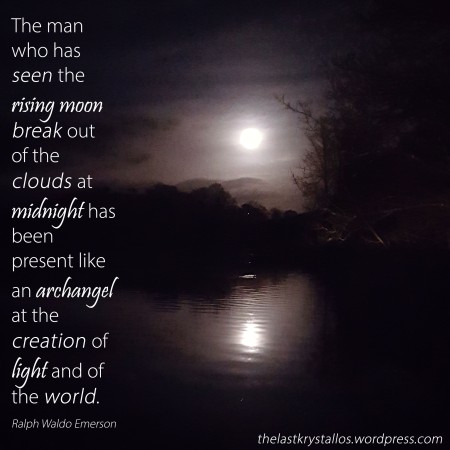 I have a gorgeous teeny tiny book on the moon, which sheds light on this celestial object. This quote from the little book echoes my own romanticism of the moon: The sun pours the light of consciousness over the world; the moon reflects the opposite: the dark of the unconscious. Such a beautiful and evocative proclamation which completely echoes my own sentiments.

Countless myths and legends are associated with the moon giving it an enigmatic and mystical aura, which draws us to moon gaze and contemplate. I love standing beneath it, watching and leaving the world behind.

Recently I had my first chance to watch a lunar eclipse in a clear sky. I’d researched eclipses just the day before, for the close of my trilogy, and on 21st January I set my alarm. At 11.30pm when I‘d retired for the night, the wolf moon had glistened large, a super moon close to the earth, in glorious light, and now at 4.30am it shone as a sliver, a bright crescent as the shadow of the earth moved across its surface. Within minutes the shard disappeared and the moon shone as a whole as totality swathed it deep rust red. It wasn’t long before it disappeared behind trees, but the sight of the lunar eclipse will remain with me as one of the wonders of nature.

The moon is vital to the health of our planet – it rules the tides, and due to its gravitational power must have a subliminal affect over our lives too. We are made up of a high percentage of water ourselves, and where the moon influences the earth’s oceans, it’s scientifically likely it influences us and our moods too. It is said it influences poetry, emotions, intuition, energy, rain, reflections, meditations, memory, healing, plant life, farming, weather, and time.

The moon, waxing and waning, evokes reverence and wonderment.

How does the moon affect or inspire you?
What do you love about the moon?