This is written for Sweet Banana Ink’s Bad Santa Blog Hop 2012, and I should probably be honest and say I’ve found it very hard to sully Santa…but here goes!

It was Rudolf who blew the whistle, and Old Nick’s face was one of sheer inglorious humiliation. Dasher snorted and Dancer turned away.
“You got the wrong man!” Santa blustered, desperation turning his face as scarlet as his suit.
The elves shook their heads and tightened their grip on the old man as he tried to dig the heels of his famous black boots deep into the frigid ground.
He began to weep as they dragged him, his tears freezing as they dripped from his white beard.  “Prancer! You tell them, we can work this out!”
The reindeer huffed and jingled the bells hung around her neck. Nick tried again, “Tell them Prancer, Vixen? Any of you? I’m innocent!”
His reindeer stood in silence, their eyes gazing down at the snow, until Comet nuzzled Cupid. Sadness glazed Cupid’s dark eyes and a tear slipped down her face. Nick tried to catch Cupid’s eyes as he was dragged unceremoniously past, but the little reindeer turned her back.
“Donner! Blitzen! You know me!” Santa cried, “We can come to an arrangement!”
Donner faltered, but Rudolph pulled rank and Donner stayed put, avoiding the old man’s gaze. Blitzen stood coldly and stared right into Nick’s eyes, and the old man shivered.
When Mrs Claus arrived she was pale, and not just because it was a cold night. She was flanked by several elves and she pulled her fur coat tight around her ample body. Nick bit his lip and her eyes froze him to his core.
“I always knew something was wrong…but I was never able to put my finger on it…” she began with pursed lips and folded arms, “It was when you gained all that weight, and grew a much bushier beard. You blamed it on excess mince pies and all those glasses of milk! Milk!” She shook her head. “Oh boy, was I foolish? You’ve been creaming off the profits ever since!”
“Darling!” Santa protested, “You don’t know what you’re saying!”
“I think I do, and I even found this!”   She pulled a moth-eaten coat from beneath her own fur and waved it in front of her. “It’s green!”
Nick balked. “And that’s what you’re judging me on?”
“It’s what you used to wear!” she hissed. “I thought you changed it because you wanted something new not because you were sponsored!”
“It was old…”
“So are you, so you should know better, you’re an icon, or you’re supposed to be!” She narrowed her eyes and hugged the old evergreen cape to her chest, burying her face into its soft, fur collar. “You’re supposed to be impartial…charitable…”
“You have no proof!” Nick lifted his fist.
“That’s just where you’re wrong…” she said in triumph pulling out her brand new smart phone. “Take a look at this!”
You Tube filled the screen and a jolly, red-faced Nick stared back at them holding a red and white can.
“You went corporate!” she spat. 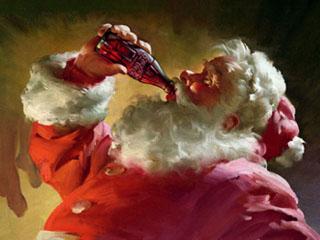 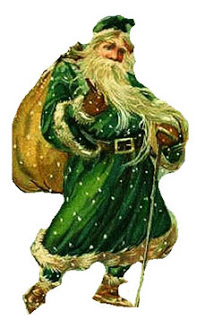