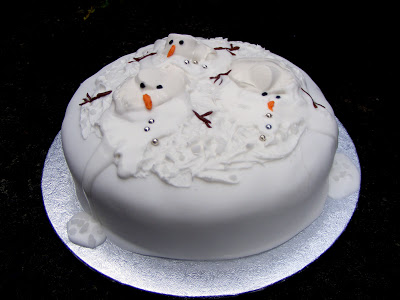 Photo by Lisa Shambrook (Please do not use without crediting)
So, it’s Christmas again…and the challenge of decorating the cake came around…

Private Photo (Do Not Use)
We have a tradition in our family, where Dad makes the cake with the help of the children. See above for 2001 photograph, many years ago, now it’s pretty much Caitlin who helps (she’s the baby in this one!)
After the cake is made, it’s left to me to marzipan and decorate. Up until a few years ago the cake was always roughly marzipaned and then slathered with stiff, peaky royal icing and then I plonked a couple of Christmas cake winter ornaments on top and that was it! We were happy, but a couple of years ago I was inspired by Kirsty Allsopp and used her idea of polar bears on the cake.
Not knowing if I could duplicate the said polar bears, I disappeared into the kitchen on my own and created… it worked! See here for the result!
Last year I made Penguins…
Ever since I have cordoned of the kitchen during the decorating process and banned anyone from seeing anything until it’s finished.
It’s even turned into a competition to see if anyone can guess what I might do each year!
This year it was melted snowmen…inspired by trulycustomcakery cake’s Pinterest pic of melting snowmen cookies, and I decided to use her marshmallow technique to put them on top of my Christmas cake! 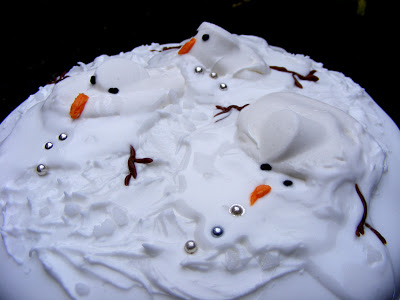 Photo by Lisa Shambrook (Please do not use without crediting)
The cake was covered in marzipan and iced with fondant icing, then I put a layer of stiff royal icing to make snow. I added more water to the royal icing to make three icing snowman puddles on top, which I loved as it ran down the sides of the cake!
Then came the marshmallows…that was the experimental bit…
Place a marshmallow on a piece of silicone or greaseproof paper and place it in the mircrowave. The instructions are not to walk away and watch at all times, as it swells (puffs up) take it out…somewhere between 8 and 15 seconds. Do not let it double it’s size or it’ll just be a gooey puddle.
Taking them off the paper wasn’t easy either. The original poster recommended covered your fingers with grease to take them off. I covered a palette knife with oil and tried, I did get sticky and I did use way more than three marshmallows, have plenty spare!
Then I made chocolate fondant arms, orange fondant noses and black fondant eyes, and obviously sugar silver balls became buttons…and there you have it a melting snowmen Christmas cake!

Photo by Lisa Shambrook (Please do not use without crediting)
How do you decorate yours?

I adore this candle my daughter bought, I want one too... pictured with #SmokyQuartz #Selenite #PinkAragonite #StrawberryQuartz
A #CrystalGrid to celebrate #Lughnasadh or #Lammas the first of the summer harvests and named after Lugh, god of the Sun, celebrated on August 1st and 2nd. A grid for abundance and growth.
Having lunch at @ysiedhq with Cait ☕🤎
Kira is done with the humidity... even with the fan trained on her, she doesn't want to go out and doesn't want to stay in...
Can you find my teeny baby dragon in this picture?
Staying up to get a few cool minutes outside before bed and to watch the ISS soar over... 💫
My lovely daughter-in-law @claudiashambrook20 just put my hair into French braids for me, perfect in this weather, and just look at my really dinky tiny plaits!
Wandering through the shade...
Waxing gibbous, leading towards Friday's full buck moon... 🌔